Posted On June 3, 2019 By admin Leave a Comment on Outdoor projects update Posted in Shop Update

I have made several outdoor projects on my YouTube channel and this is a quick update on the ones that I still have.

One of the first outdoor projects that I ever made was a kid sized picnic table.  It was made some time in early 2013 and has had plenty of use.  I was not making videos yet when I made it so I made another one in in June of 2015 and sold it to a local family through Facebook.  It is now the official painting station for all kid related crafts. 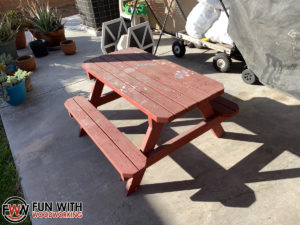 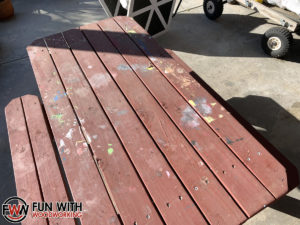 The first video that I ever posted was the Planter Box made from cedar fence pickets.  I posted it on June 16, 2013.  I had many compliments on the project and that was very encouraging.  The number one question was about drainage and how long it would last.  I set in in place right after I built it and it has not moved since.  It’s really getting worn and most of the finish on top has worn off with the weather but it’s still doing it’s job so I am extremely happy. 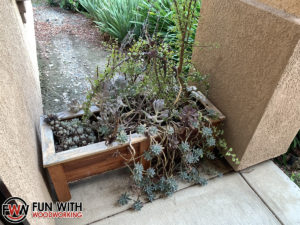 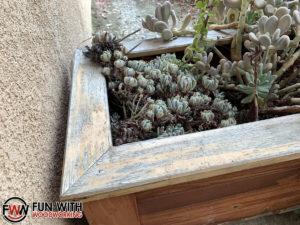 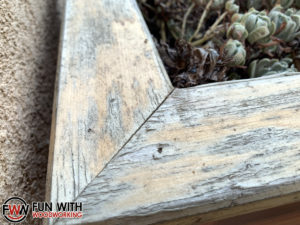 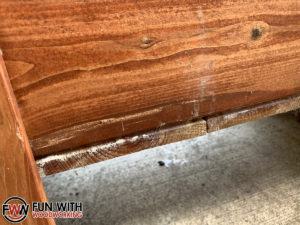 I made this wraparound hanging planter box in January of 2014 for my wife.  It is also made out of cedar fence pickets.  It is held to the post with 6 screws and the outside was painted with spray paint before I hung it up.  It gets rained on and exposed to direct sunlight but has held up pretty good so far. 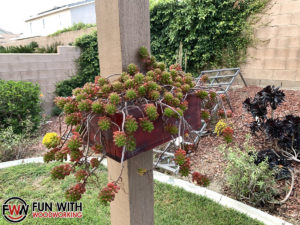 I made this quick and easy garden bench out of redwood 2×6’s and 2×4’s in February of 2014 and it has been sitting in this same spot since then.  It does not get exposed to direct sunlight but gets rained on quite regularly.  I made this right after getting my first pocket hole jig.  I have been meaning to sand it down and re-finish it for a while now.  I may have to try designing another one without pocket hole screws and see what I can come up with. 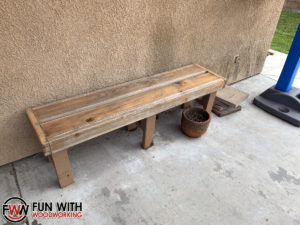 I made the quick and easy garden bench in under 2 hours for less than $20.00 in March of 2015.  It’s actually just an Aldo Leopold bench that it a little wider and I changed to angle to make it a little more comfortable.  The original angle made me lean back to far.  It’s been moved around the back patio a lot but it’s usually under the patio cover so it doesn’t get much direct rain.  It could really use a new coat of spar urethane too. 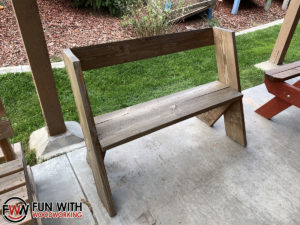 I made the Quick and easy pumpkin/squash/watermelon trellis for under $10 in March of 2016.  They worked great for that planting season but were pretty much falling apart a year later.  I like to think that they look rustic now and have left them in place as my wife has seemed to lose interest in growing melons. 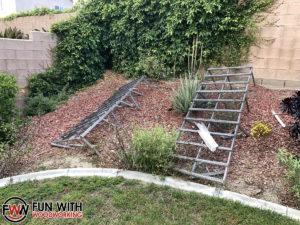 I built the 4ft picnic table in January of 2017 and finished it about 3 months later.  It lives under the patio cover so it never gets rained on.  The sun hits it in the early morning and a little at sundown. 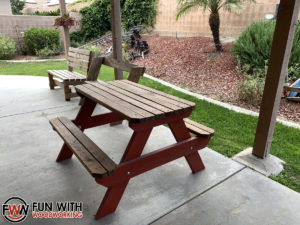 The 2 foot tall Star Wars Tie Fighter from half a sheet of plywood was built in May of 2017.  I have no practical use for it but don’t want to get rid of it yet.  It lives on the kid sized picnic table under the patio cover.  It gets direct sunlight in the mornings but no rain.

The Lumber Storage Rack was built in October of 2017 and gets used regularly.  I am constantly rotating 2×4’s and other stock through it.  It is in direct sunlight in the afternoon and gets rained on.  It is starting to lean forward just a little but it is holding up great.  In hind sight, I wish that I would have made it 8 ft long instead of 4. 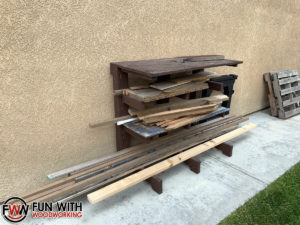 I made the simple and strong 2×4 workbench in December of 2017 and it is the most used project that I have ever made.  The 8ft length is awesome and it is sturdy as hell.  It lives along side the same wall as the lumber storage rack and gets the same weather & sunlight.  I did add 2 – 6ft pieces of 1 1/2″ x 1 1/2″ strips into the clamping slots on the right hand side.  I shot footage to make an update video for it but never got around to editing it. 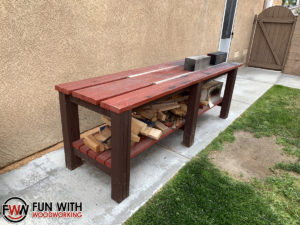 The last outdoor project that I made was the Park Bench with a Reclined Seat Ver. 3 in September of 2018.  I meant to sand and finish it within a couple of weeks but life intervened.  Then, at the beginning of the year, it started to rain for like 3 months straight.  It has finally dried out enough for me to sand it now but I have a million other projects going on so I don’t see it happening anytime soon.  It is looking pretty rough but holding up well so far. 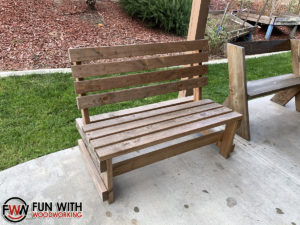