Posted On June 16, 2018 By admin Leave a Comment on We built a giant Cub Scout Bridge Posted in project

My younger son’s old Cub Scout Pack, Pack 803, had grown quite large so last year we started a new sister Pack, Pack 2017.  It was started with around 35 kids and a year later has grown to 110.  It was officially started right after the bridging ceremony for the old pack.  Fast forward 9 months and it was time to start planning for a new bridge.

My older son bridged into Boy Scouts last year from Pack 803 and his Webelos den all chipped in to make a new bridge for the pack.  You can watch the video of the build here:

With the current size of the Pack the leaders decided that they wanted a bridge that was a little more robust.  One of the leaders stepped up to the challenge and, using CAD software, designed a monstrosity of a bridge.  It was 12 feet long, 4 ft wide, and had 8 – 4×4 posts for the 1 1/2 inch thick rope railing.  It was also designed to break into 2 – 6 ft lengths for easier storage.  The bridge was started in the shop of the leader that designed it.  It was begun by cutting an arch into 3-  12 ft lengths of 2×12’s.  They  sanded it down with a belt sander to refine the arch and installed all the cross braces.

At this point 13 – 2x6x8’s were purchased and cut in half to make 26 treads to span the arch.  13 of them were given to me to CNC route the Scout Law into.  While I was working on those they had a local company that fabricates lift and leveling kits for big trucks and SUV’s named STREET DIRT TRACK design and build custom brackets for the 2 pieces of the center span to attach to. 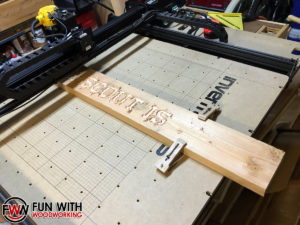 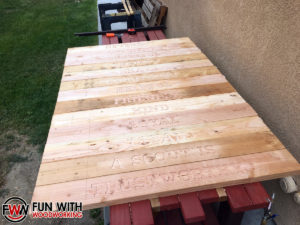 I got my treads routed and painted by the Saturday of Memorial Day weekend.  A group of dads were also able to get together that Friday and get the central span cut in half, install the braces, and add 2 steps to each side thus increasing the length of the bridge by 6 ft. 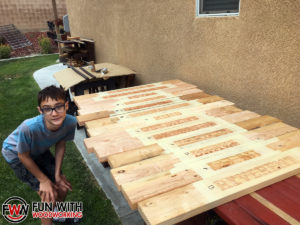 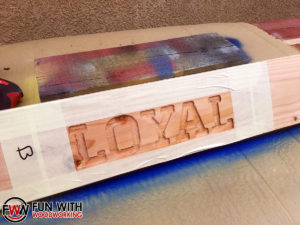 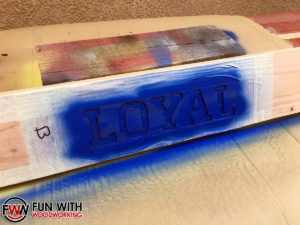 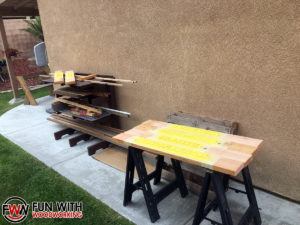 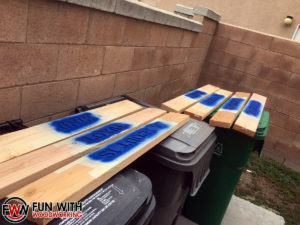 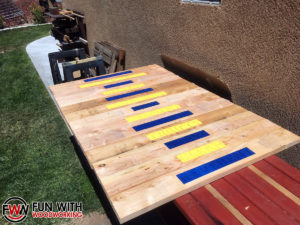 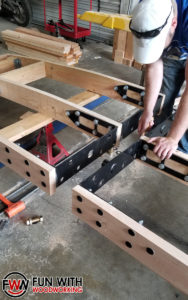 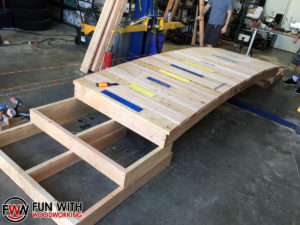 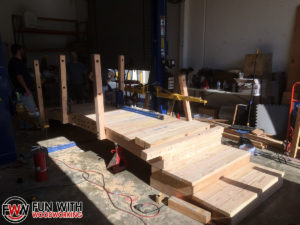 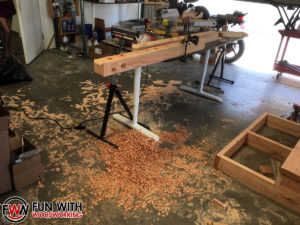 On Wednesday night the pieces of the bridge were moved to one of the Pack leaders home and a bunch of volunteers came over and gave it a couple of coats deck stain, aptly named “Wood Bridge”.   I helped to move one of the large sections into the garage and managed to strain my back a little. 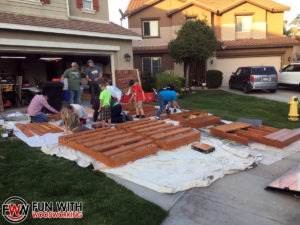 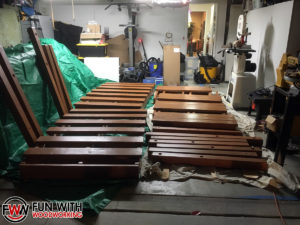 Some of the routed out lettering for the Scout Law got sanded a little too aggressively and needed touching up so I took those 13 planks back home with me.  The sawdust also wasn’t cleared out properly before the stain was applied so it was pooled up in the corners and soaked up the stain.  I spent the next evening cleaning them out and hand painting them with spray paint in a bowl to make sure that the colors matched up properly. 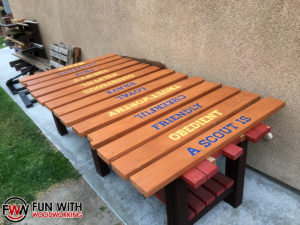 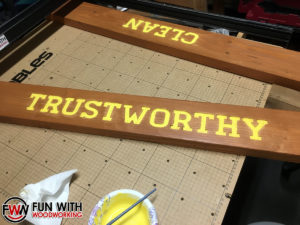 Saturday morning came along bright and early.  The bridge assembly team started at 6:00 am and had the bridge completely assembled at a local park by 8:00 am.  I had originally planned to help with that portion but my back was still sore so I didn’t make it in time to get any pictures of it being put up.  All the Cub Scouts were there for the 9:00 am ceremony and it went off without a hitch.  Everybody was impressed and had a really good time.  After everybody got all the pictures on it that they wanted the disassembly team had it broken down and stored back in the trailer within about 35 to 40 minutes.

The final dimensions for the bridge are 12 ft long, 4 ft wide, and 2 ft tall to the top of the bridge.

Overall, it was a great success and a very welcome addition to Pack 2017.